In this post, we are going to go through a complete example of how to build a custom dialog using the Angular Material Dialog component.

We are going to cover many of the most common use cases that revolve around the Angular Material Dialog, such as: common dialog configuration options, passing data into the dialog, receiving data back, and dialog layout options.

This is a step-by-step tutorial, so I invite you to code along as we are going to start with a simple initial scenario. We will then progressively add features one by one and explain everything along the way.

In this post, we will cover the following topics:

In order to use the Angular Material Dialog, we will first need to import MatDialogModule:

Notice also CourseDialogComponent, this component will be the body of our custom dialog.

In order for the component to be usable as a dialog body, we need to declare it as an entryComponent as well, otherwise, we will get the following error while opening the dialog:

Step 2 of 5 - Creating and opening an Angular Material Dialog

With this in place, we are now ready to start building our dialog. Let's start by seeing how can we open a dialog from one of our components:

Let's break down this code, to see what is going on here:

The class MatDialogConfig allows us to define a lot of configuration options. Besides the two that we have overridden, here are some other commonly used Material Dialog options: 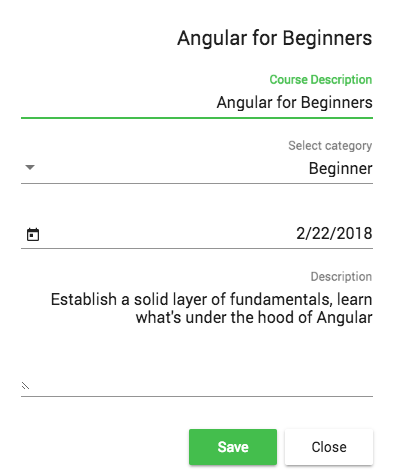 An example of when we would like to set this to false is the Draft Email Dialog of an Email application like Gmail, where the email draft remains opened as we search for ancient emails.

Let's now have a look at CourseDialogComponent. This is just a regular Angular component, as it does not have to inherit from any particular class or implement a dialog-specific interface.

The content of this component could also be anything, and there is no need to use any of the auxiliary Angular Material directives. We could build the body of the dialog out of plain HTML and CSS if needed.

But if we want the dialog to have the typical Material Design look and feel, we can build the template using the following directives:

Using these directives, our dialog will look something like this: 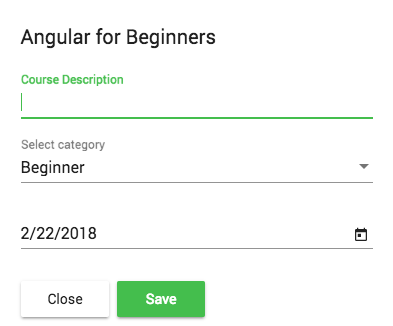 Here are the 3 main directives that we used to build this dialog:

Step 4 of 5 - Passing Input Data to the Material Dialog

Dialogs are often used to edit existing data. We can pass data to the dialog component by using the data property of the dialog configuration object.

Going back to our AppComponent, here is how we can pass some input data to the dialog:

We can then get a reference to this data object in CourseDialogComponent by using the MAT_DIALOG_DATA injectable:

As we can see, the whole data object initially passed as part of the dialog configuration object can now be directly injected into the constructor.

We have also injected something else, a reference to the dialog instance named dialogRef. We will use it to close the dialog and pass output data back to the parent component.

Now that we have an editable form inside a dialog, we need a way to pass the modified (or new) data back to the parent component.

We can do via the close() method. We can call it without any arguments if we simply want to close the dialog:

But we can also pass the modified form data back to AppComponent in the following way:

In the component that created the dialog, we can now receive the dialog data in the following way:

As we can see, the call to dialog.open() returns a dialog reference, which is the same object injected in the constructor of CourseDialogComponent.

We can then use the dialog reference to subscribe to the afterClosed() observable, which will emit a value containing the output data passed to dialogRef.close().

A running example of the complete code is available here on this branch on Github.

I hope that this post helps with getting started with the Angular Material Dialog and that you enjoyed it!

If you would like to learn a lot more about Angular Material, we recommend checking the Angular Material Course, where we cover different types of widgets in much more detail.

If you have some questions or comments please let me know in the comments below and I will get back to you.

To get notified of upcoming posts on Angular Material and other Angular topics, I invite you to subscribe to our newsletter:

In this post, we are going to go through a complete example of how to implement Web Push Notifications in an Angular Application using the Angular Service Worker. Note that these are the exact same native notifications that we receive for example on our

In this post, we will cover in detail an error message that you will occasionally come across while building Angular applications: "Expression has changed after it was checked" - ExpressionChangedAfterItHasBeenCheckedError. We are going to give a complete explanation about this error. We